A downloadable game for Windows

It starts out simply enough. An apprentice at a small-town potion shop is out looking for ingredients when she accidentally falls into a cave. A cave with monsters in it, as it happens. Despite her lacking much combat skill beyond blocking and throwing potions, the apprentice apothecary Brill is thrust into an adventure, with the fate of the entire continent of Ruphand hanging in the balance. It may seem like a story you've heard before. But not everything is quite as it seems...

In Ruphand: an Apothecary's Adventure, the player follows Brill Yance, whose only offensive skill is throwing bottles at things until they go away. By using Sample to scrounge up ingredients off the ground, Brill can mix up a variety of potions, which are also her primary means of defense.

Every move- whether it's one of Brill's potions, or a monster attack- has an associated Windup time and Delay time. By paying attention to how fast it'll take to ready attacks, strategically blocking attacks, and employing the status effects associated with each of the six elements, the player can avoid damage and fight back against powerful foes.

First released in 2017 on RPG Maker Net, Ruphand has returned to active development. The present version of the game provides at least twenty hours of gameplay, and it's still not finished; there's still more story to tell!

When booting up without any saves available, advise that the default selection is New Game, instead of Load Game.

Ran out of Pepperflasks before the First Boss, so in an exploratory mission, I went without crafting anything new. A.k.a Punching, Blocking, and whatever that Healing Potion is. Given the trade in Damage vs. HP, if I did it perfectly, I could win, but nah, decided to take the wipe and build up my Super PF reserves. Super PF being the only thing I'm making for now because I wanna save all my other resources.

And then I find 6 Moon Dust on the ground while grinding against Slimes for the stuff. Wow. 6. WOO! Moon Dust! 9 Super PF in my bag, first boss, you going down!

Is there any reason to use the elemental attacks before the First Boss?

P.S: Why can we Sample in battle? It doesn't seem to do anything?

Beat the Boss, got the Exit, and then wiped myself on the Beach. Probably shouldn't be able to do that then find myself in bed? Never tried to wipe right after beating the Boss, but would I bypass the exit if I did? That'd be a major glitch.

Then again, this is 0.3.5 P1. We'll see what fixes P2 brings. Maybe have the First Boss not drop a Shield I'm already using?

Thanks for giving my game a go!

New Game instead of Load Game when there's no saves sounds like a good idea. And I could probably implement it pretty easily! I'll get right on that.

Looks like I've got to look at early-game balance again- there's supposed to be a lot of materials for Pepperflasks. As far as the elemental Formulas go in the first cave, the bats resist Earth and the Rock Mimics resist Fire, while most bugs are weak to Earth. They're helpful because of the extra effects they come with, but they're not strictly necessary in the Earth Cave, especially since Super Pepperflasks are a thing.

Coming up pretty soon, there's one dungeon that will basically showcase each element that's coming up soon, and you'll also get an easy way to see what elements will be useful in a given situation after some conversations back home in Orvas.

Speaking of which: I should probably set some dialogue that tells the player about the Quest Journal (which wasn't a feature until much later in development) and suggests that Brill goes back home to Orvas. While I didn't leave too many roadblocks in place in case the player wanted to try exploring and fighting things nearby, it is a generally good idea to go back home to Orvas and spend that Sil you got. Don't worry- you'll find a use for that spare Simple Shield pretty soon.

Brill's return point changes after leaving the Earth Cave for the first time, so she shouldn't accidentally warp past the Crystal event.

I'm not sure how  that Sil text got messed up, but it'll be fixed in 0.3.5 P2. Sample in battle was supposed to go with mid-battle crafting, which was an early idea that was scrapped. I never really gave it a second thought, but it doesn't really make much sense, so mid-battle Sample will be disabled in 0.3.5 P2.

Earth Cave balance is good. If I felt like spending my ingredients, instead of hoarding them like a non-RP gamer, I'd be totally good on regular Pepperflasks.

P.S: Why does Brill have a Life Stone in her room, unused? Are they good alchemy ingredients, or something?

You know how sometimes you'll get something, put it somewhere for when you need it... and then time passes and you completely forget it was there in the first place? That's probably what happened there.

Thanks again for the feedback!

Tried the game on Android using Joiplay. The game seems really cool, but I couldn't get very far because fights where monsters are duplicated (like spiders on the south coast) are lagging as hell on Joiplay ( no matter Joiplay settings, clearly a problem with how duplicated monsters are called or handled on battlescreens) Doesn't seem to occur when monsters in the fight are differents (like 1 spider and 1 sandcrab). That said, I'll give a real try at the game once I have a ccomputer, because it looks promising and interesting and deserves to be added on m'y watchlist 🙂

Wait, there's a phone emulator that runs this? I'll have to look into this issue after 0.3.5-P1 releases (which should be soon), because now I kinda want to try it. Thanks for letting me know about this!

No problem. And yes, Joiplay is getting popular among Android users for its compatibility, options, support of rpgm/HTML, open-sourcing and ease to use. That said, it's also possible Joiplay don't correctly support some Yanfly plugins or my phone not being powerful enough. The lags I have might not be your fault. I would suggest you to focus on completing your game and optimize it for pc, and then, for Android. Wish you the best 👍

just started playing, and this is a really interesting game! I like that the unique combat uses a lot more strategy than just pure brute force, and the writing is funny as hell too. can't wait for future developments

though there is a bug with the bulletin board next to inspector dill's office, if you try to read it you'll get stuck in it instead

I just gave that a look- it looks like the passability was somehow set to "above player" on the first page of the event.

No idea why that was a thing, but it'll be patched in the next version. I may potentially release a hotfix, too.

EDIT: Argh! The second bounty board later on had the same issue.

I could release the first half of 0.3.5 early to fix this as it's a very glaring mistake, and I've almost finished with said first half. The update will also have some other minor bug fixes- hopefully Burn won't break under certain niche conditions anymore.

Hate to double-post, but I just wanted to let you know that 0.3.5 P1 is out. That bug should be fixed now, and if your save is still stuck in the bulletin board it'll automatically walk you out of it if you examine it once or twice. 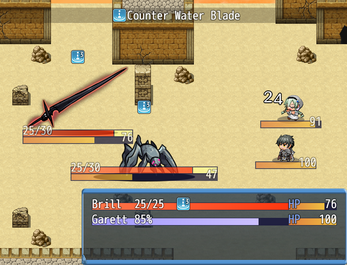 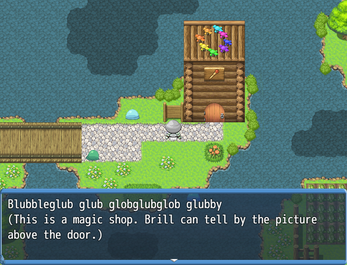 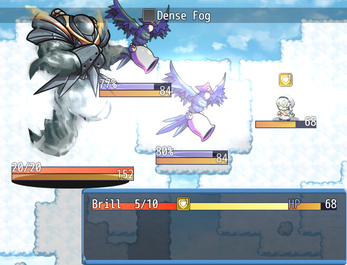 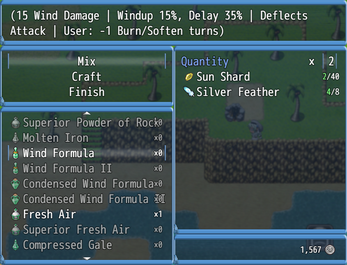 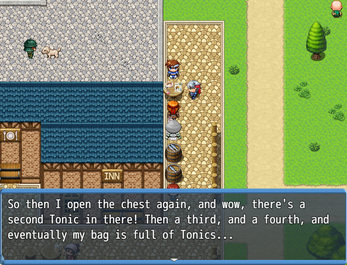